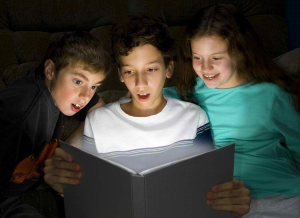 This week in the YA Indie Carnival we were asked to write about our most memorable fan experience. I am fortunate to have a few.

I recall a little brown eyed, brown haired girl that attended the Midnight Child launch party. She couldn’t have been more than ten or eleven and looked a lot like I did at that age. She giggled when she asked me to sign her book and giggled again when she told me that William was her favorite character. She asked me if I had read Twilight and if I was Team Edward or Jacob. When I told her that I was married to a guy named Edward who acts like Jacob she giggled again. Then she told me that Jacob was her favorite because he was “hot” and giggled some more.

I also had a great experience with a book club that invited me as a special guest to their meeting. I should have known how much fun it would be the moment they told me the meeting was at the winery. I’ve never really been part of a book club before and these ladies did it up right. They were so excited about Of Sun & Moon and they even planted the seed that became the Midnight Child launch party. Good food, good wine, and good books are always memorable. (well, maybe not always good wine :))

However, my most memorable fan experience wasn’t made at either of these places. It was at the bank. I was standing outside the conference room waiting for a big meeting when the retired Chairman and CEO tapped me on the arm and started gushing about the books. Please understand, this is an extremely respected, keen, conservative business man in his seventies. And he not only raved about the books – he even quoted them…multiple times. He had not read just one, but all three and plans to read the entire series. I was in complete shock. My mind went blank. My mouth wouldn’t work. I just stood there and listened. A friend later told me that he heard me say, “You know they’re for teen girls, right?”

Now that you’ve seen my side show, check out the fan experiences by these other indie authors and reviewers…

One thought on “Shock & Giggles: Most Memorable Fan Experiences”