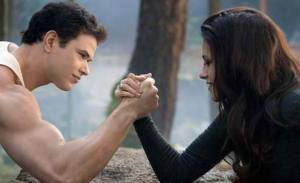 It took New Moon reaching theaters before I would finally admit to being a Twi-Mom. To mark the release of the last film of the saga, I’m sharing my journey from Clueless to Twihard.

So where did it start for me? Back in 2008, I was playing around with Flair in Facebook. You remember that? It was (still is) that FB app where you collect and share virtual buttons to put on your virtual cork board. Anyway, I was doing a search for some of my fave things and I searched Buffy the Vampire Slayer, of course, because BTVS is awesomesauce. In searching for the vamp slayer, I kept stumbling across the name Edward Cullen.

I had no idea who that was. Absolutely none. Still, the name was so prevalent that I decided that I must be getting old if I hadn’t heard of this guy before. I couldn’t have that, so I immediately googled it and found a Wikipedia entry about Twilight. It sounded okay, but it wasn’t enough to convince me that I needed to seek the book out.

The next thing I knew, the casting and buzz for a Twilight movie was everywhere I looked. And every time I saw coverage on it, throngs of screaming fans were not far behind, and I wondered…where did this come from?

So, I decided that I needed to read this book (no, I had no idea at the time that there was more than one book). I asked my mother if she had it – because the lady is like her own library – and she did have it. So, I borrowed it from her, and finished it rather quickly.

And I thought, hmmm. That was okay, but I don’t see what all the hype is about. The girl was always complaining and the guy seemed a bit like a stalker. So, I went back to Mom and asked if she had New Moon – she did – so I borrowed it and finished it rather quickly.

And I thought, hmmmm. That was okay, but I don’t see what all the hype is about. The girl is still complaining and now she seems dangerously dependent on this guy. So, I went back to mom and asked if she had Eclipse – she did – so I borrowed it and finished it rather quickly.

And I thought, hmmmmm. That was okay, but I don’t see what all the hype is about. The girl is still complaining and dangerously dependent on this guy. So, I went back to mom and asked if she had Breaking Dawn – she did – so I borrowed it and finished it not as quickly – hey, it was a big book and those were my pre-kindle days.

And I had a really hard time getting through the pregnancy and birth because it was just really disturbing to me, but I finally did and I thought, hmmmmmmmmmmm.  I didn’t like the books, at least that’s what I thought when I finished each one, but actions speak louder than words and here I was flying through not one, but all four.

Then Twilight hit theaters and Mom said that since she had graciously allowed me to borrow all the books, it was my duty to take her to see the movie. I agreed. On the evening of the movie, my sister, Beth, happened to be at Mom’s house when I came to pick her up.

I need to step back and fill you in on a little history before I continue. Over the years, Beth and I have tried to “one-up” each other for brownie points with Mom. Somewhere along the way they became known as “teacup” points, a reference to Disney’s Beauty & the Beast because Mrs. Potts always has her favorite teacup by her side. So back to the story.

I arrive at Mom’s house to pick her up to see Twilight, a movie she has begged both Beth and I to take her to for weeks. Beth is there and she realizes what’s up and the teacup points at stake. I play the nice guy, cause hey, I am. I ask Beth if she wants to go with us and she makes this face like we are total dweebs and says that she’ll pass. She leaves and a little while later, we head out the door too.  We arrive at the theatre and and I burst through the doors to get our tickets and who is standing there, but Beth with three paid tickets in her hand and a Cheshire Cat smile. Ugh! Little sisters!

Anyway, something was wrong with the projector. The movie was out-of-focus most of the time or stopped completely. The theatre didn’t give anyone refunds. It was horrible, but because it was the three of us, we had a great time. And so, the next weekend we went to a different theatre and saw the movie again. And Beth even admitted that she liked it.

I’ve watched the movies over and over again and love them. More so than the books (usually it’s the other way around). Can’t wait for Breaking Dawn, Pt. 2 tomorrow. Mom, Beth, and I already have our tickets!!!  (Yep, I bought them ahead online 😉