I’m so excited to have you be a part of my release day for HUNTED, Book 3 of the Donovan Circus Series! Sometimes it feels like I just released the first book, GIFTED, a few days ago; other times, it feels like more years than it’s actually been! 🙂 Thank you to the amazing bloggers, authors, and readers who have helped make this such an awesome release day. Also a special thanks to my cover designer, Kate at Dwell Design & Press for her amazing cover work! I hope you all find the third adventure as exciting as the first two – and perhaps much darker, as there are many underlying things bubbling to the surface, secrets coming unveiled, and a death that will shake the troupe in a terrible way. 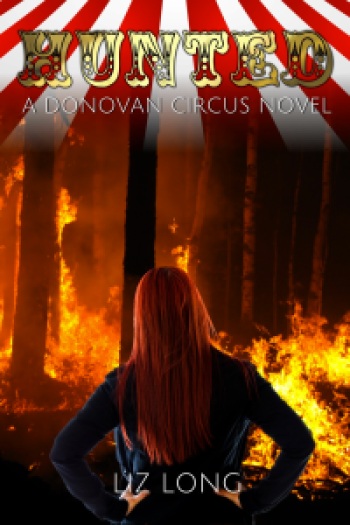 Lucy Sullivan finally belongs with the gifted Donovan Circus. Members are finding their rhythm, even the new folks from the Grayson Circus who joined after the last attack. Lucy feels like a trusted leader who can win the gifted battles and prevent humans from discovering their existence.

When tragedy strikes camp, a distraught Sheffield sends Lucy and her gifted team to hunt down the enemy – Alex, a Chameleon with a wicked ability for war. He’s out for blood and won’t stop until Lucy and her friends are dead.

This time, it won’t be Lucy’s gift that is tested – it will be her morality. To save her circus, the price will be greater than she ever expected. This time, she will lose someone she loves. And it will change everything.

Haven’t read the first two in the series? No problem! You can get the first adventure, GIFTED, for only 99 cents on Amazon, B&N, and iBooks!

In Gifted, meet Lucy, a Firestarter who just wants to be normal amongst the freaks. She can control fire, though she’s quick to discover that power doesn’t always bring good things. Her famous father may have created a fiery legacy, but their good name is threatened when Lucy’s framed for murder. Felix Hardy, an old “friend” of the show, offers another side of the Donovan Circus story, one her father never told her. As she struggles to clear her name, Lucy will discover that maybe some things are better left in the past. 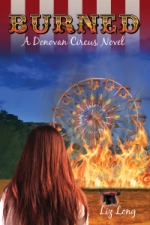 Burned picks up right where Gifted left off, in a new city and ready to get back to work. When Lucy is attacked on the grounds, it’s discovered her enemy had friends – big ones. Medved, a Shapeshifter known as “the Bear,” is intent on the gifted world’s exposure to humans. To build his army, he needs Sheffield and Lucy out of his way. Sheffield sends Lucy and her friends to form an alliance with the Grayson Circus members, who have as many quirks as the Donovan group. Not all are who they seem and Lucy must choose who to trust before Medved kills them all.

Liz Long is a ridiculously proud graduate of Longwood University with a BA in English. Her inspiration comes from action and thriller genres and she spends entirely too much time watching superhero movies. Her fabulous day job as a Social Media & PR Strategist includes writing for LeisureMedia360 (Roanoker, bridebook, Blue Ridge Country magazines) in Roanoke, VA.

The Donovan Circus series has best been described as “X-Men meets the circus with a murder mystery thrown in.” Her second book Witch Hearts, is a story about a serial killer hunting witches for their powers. Her newest title, A Reaper Made, is a fantasy about a Reaper who must work a little magic to save her family’s souls from demons. All titles are available for paperback or ebook on Amazon, Barnes & Noble, and iBooks.

To learn more about Liz, visit her website: http://lizclong.com.